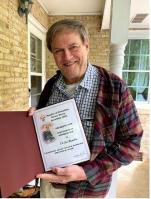 Sir Knight Lee Heavlin was awarded a Divine Mercy Assembly Certificate of Appreciation for his past exemplary services as Faithful Navigator and as Scribe. The award was presented
at Lee and Yoli’s home due to Covid-19 restrictions. This award is way overdue! Lee was the founding father of Assembly 3005!

Without Lee’s dedication in establishing an Assembly in Chapel Hill we would all be driving to Burlington still or northern Durham. Lee’s strong leadership set the Assembly on a firm footing that all succeeding Faithful Navigators would follow!

Lee is a 30-year Navy veteran and has had a strong presence with the VFW and American Legion Posts in Chapel Hill. He has been Post Commander and was instrumental in the planning of a new Post Home for the American Legion Chapel Hill Post on NC Highway 54 West.

Many VFW local, district, and state activities were conducted at the same time Lee was creating Assembly 3005. A tremendous achievement! Lee is a true leader! His guidance and direction have led to many accomplishments in both the Assembly and Council. Congratulations Lee!

2 thoughts on “Heavlin Honored by Assembly”