Each year at about this time we go on our search for assembly leadership for the coming year.  Bill Jackson is stepping down as our Faithful Navigator and will soon be, if elected, our newest Council Grand Knight… for a second time.

He asked for wise counsel.  That means he already asked Sue what  she thought.  His guru and fellow knight thought a while and answered in just a few words.  A few simple words that don’t provide an answer.  The words are reflective and ask the listener to look deep inside.  He said:

“Leadership is what they need. Love and understanding sets the standard. Fun doing it builds a group. It is the”fabric of our lives.”  But, Bill already knew that and so did Sue.

You see great men and women look at tough times as opportunities.  They just get up in the morning and “get going.”  How about you?  Are you looking for an opportunity in discipleship?  Your church needs you–especially as we deal with the consequences of Covid-19.  He is calling us, still.

Don Williams shared with us the following about today’s loss of their Assembly’s Past Faithful Navigator, Joel Lipsey. 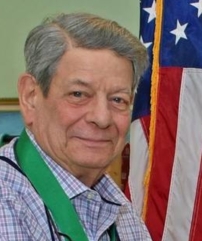 “It is with sadness that I can report on the passing of Sir Knight Joel Lipsey shortly after noon today.  He was taken off life support around 11:30 a.m. and expired about 40 minutes later.   In the end, his lungs, which had been so problematic for him for more than 10 years, couldn’t work well enough for him to be able to live without a respirator.  With Joel was his wife Cathy, a Duke chaplain, Karen Morrissette, assorted nurses, and Christine and I.     It was a peaceful transition into the arms of his Lord.

To honor Joel’s love for his country, those gathered sang two of our Knights of Columbus Assembly’s standard songs shortly after he passed:   America the Beautiful and God Bless America.   Joel will be interned at the National cemetery in Salisbury and his funeral activities will be handled through Hudson’s.   Note that dates and other arrangements are uncertain though given the present Covid-19 issue.

Joel joined the military at 16 (he fudged his age so he could get in) and was once stationed in Canada as a radar officer directing fighter planes to intercept Soviet bombers during the Cold war.   While he was a patriot and an airman, Joel felt that war was a terrible tragedy and never glorified war.  He truly loved his country though and was proud to have defended her.  He was an officer for local chapters of the Civil Air Patrol and American Legion.  After his military service Joel proudly worked as fire safety engineer for Underwriter’s Laboratory for well more than 3 decades.

Joel recently served as the Msgr. William F. O’Brien Assembly’s Faithful Navigator and Color Corps Commander and was a Lecturer at St. Matthew. ”

Divine Mercy Assembly members share in their grief.  Joel was a fixture in the Chapel Hill veterans’ arena as a veteran’s advocate, a veterans service officer, and so much more.  We were amazed at his tenacity, hard work, and  participation in local community events up until the end.  He gave witness to discipleship through service to others.  We join Don and his Sir Knights as asks, “Please pray for Cathy and for the repose of his soul.”  Amen